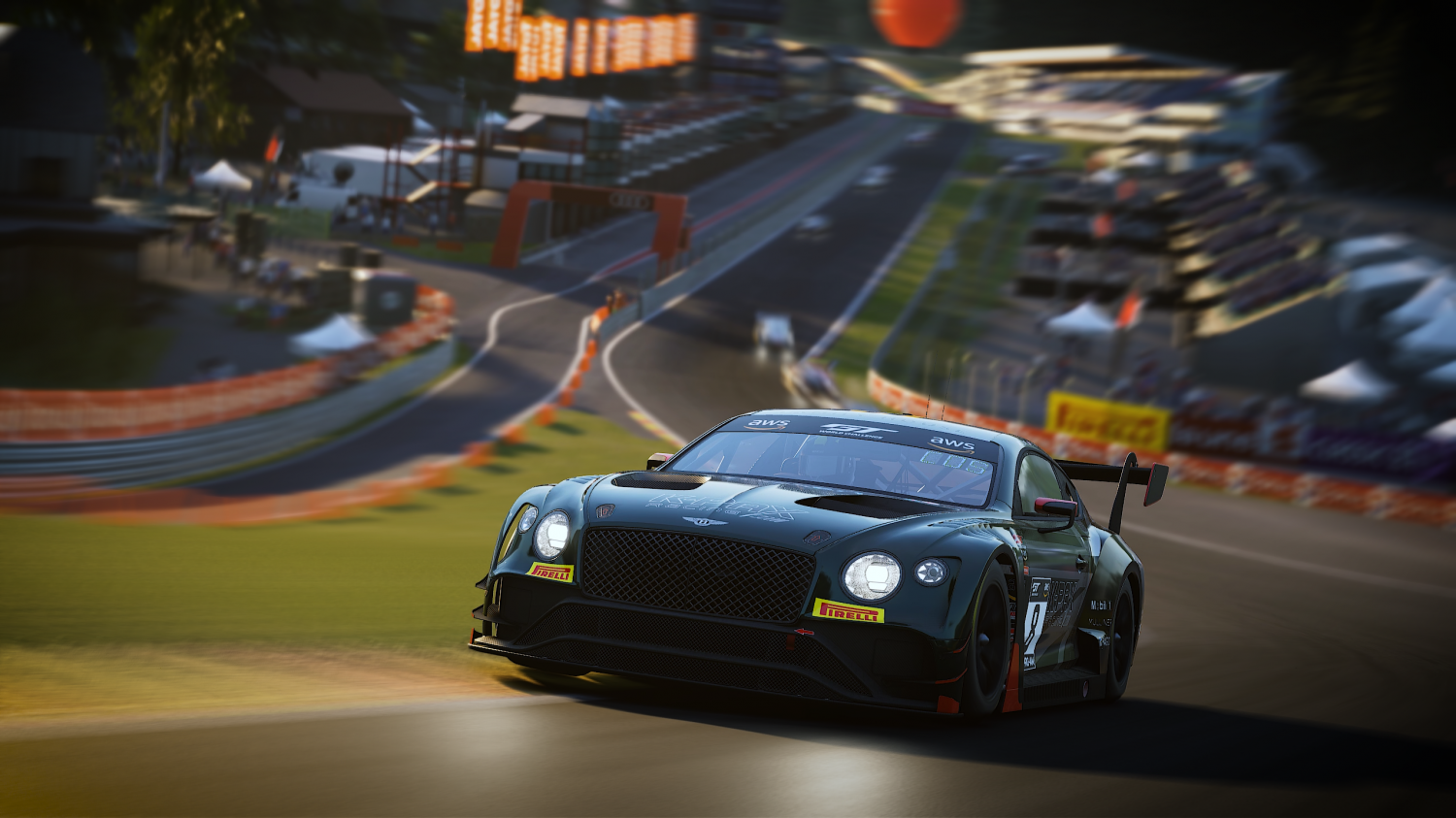 45 Entrants Set for a Spa Esports Showdown this Saturday

A week before the eyes of the world will focus on the TotalEnergies 24 Hours of Spa, this Saturday the sim racing world provides a preview with Round 3 of the GT World Challenge Esports America Sprint Series at the iconic Circuit Spa-Francorchamps.

45 of the continent's fastest sim racers are set to take the virtual green flag in Assetto Corsa Competitizone, the official simulation of Fanatec GT World Challenge powered by AWS.

Fresh off of his victory in the second round at Donington Park, defending champion Michael Kundakcioglu enters the event with a 10 point advantage over Round 1 winner Cody Pryde. SideMax Motorworks driver Kundakcioglu headlines the McLaren contingent which has been well represented in the season to date with Matt Leeman (Hillmount Racing), Aenore Rose (Jean Alesi Esports Academy, Simon Fisher, (RacingSimTools eSports), and Ryan Walker (Madhaus Racing) all also in the top ten in points.

Last season's GT4 champion Rose will not be in the field this month which opens the door for Griphax Engineering's Aloo Gobi to complete the McLaren quintet. Pryde returns in his No. 1 PPR Esports Porsche 911 GT3 R after an eventful second round at Donington that saw him record a hard-fought sixth place. Pryde is the only Porsche driver to have scored points so far in the championship, but Mia Swensen (Intruder Racing Team), Carl Matthes (KOMP Racing) and Jon Steele (TSE Racing) aim to change that with a solid run at the Belgian circuit that has seen Porsche win overall in the real-world 24 Hours of Spa in each of the past two runnings.

On the strength of a fifth at Kyalami and a runner-up result at Donington, Chris Severt enters Spa sitting third in the championship just 15 points behind Kundakcioglu. Severt will once again pilot the No. 81 Black Hawk Racing Aston Martin Vantage AMR GT3, while Nicolas Alvarado (New World Sim Racing) and Killian Ryan-Meenan (SideMax Motorsworks) will look to add to their point tallies that have them 12th and 13th in the standings, respectively. They are joined in the Aston Martin stable by Steven Daniluk's No. 8 Jabba Racing entry.

The Mercedes-AMG GT3 Evo includes Kyalami podium finisher William Hendrickson (Jean Alesi Esports Academy) who returns to the championship after missing the previous round at Donington. He nevertheless holds fifth in the standings and will be joined by Adrian Bourdon (SOP Esports Racing) and Maximilian Riveros (Final Lap Simracing).

The HPD JAS Pro America team has been solid all season, headlined by a run to the podium by Zach Patterson last month in the No. 24 Acura NSX GT3 Evo. He sits fourth in the points table, while teammate Cardin Lu is 11th after scoring his first points of the season in the last race. After real-world driving duties prevented him from participating at Donington, 2019 Pirelli GT4 America SprintX Pro-Am runner-up Karl Wittmer is back in the fold with Acura's official sim racing squad, while GT World Challenge Esports America veteran Josh Staffin completes the marque's lineup.

The long straightaways at Spa may prove to be the perfect place for the BMW M6 GT3 to stretch its legs. If so, Philippe Simard will be a driver to watch as the R&K Racing driver has been rapid, albeit somewhat unlucky, this season. Simmard is seventh in the standings through two rounds and seeking his first win. Also representing the Bavarian manufacturer will be Caleb Lavender (Private), Caique Oliveira (Corinthians Breadking), Erich Armijo (CENTELLA D'LUK) and Brian Mandeville (Caribbean Sim Motorsport).

Émile Carpentier scored Audi's only point through two rounds the last time out at Donington and will look to build on that this month in the privately-entered No. 11 Audi R8 LMS GT3 Evo. Two other R8 machines are entered this month for EGT Motorsports driver Alexis Moisan and CENTELLA D'LUK pilot Tomas Ortiz.

The final three entries belong to Pass on da Grass teammates Jake Langevin (Pass on da Grass) and Michael Fritz plus Adrian Fernandez (Forecloak Media ADRA Sprint) in Bentley Continental GT3 machines. As has been the case in each of the first two Sprint races of the season, a mandatory pitstop featuring at least one liter of fuel must be served between minutes 25 and 35. Changing tires is not required but will provide a noticeable performance advantage, albeit with the caveat of remaining stationary for longer.