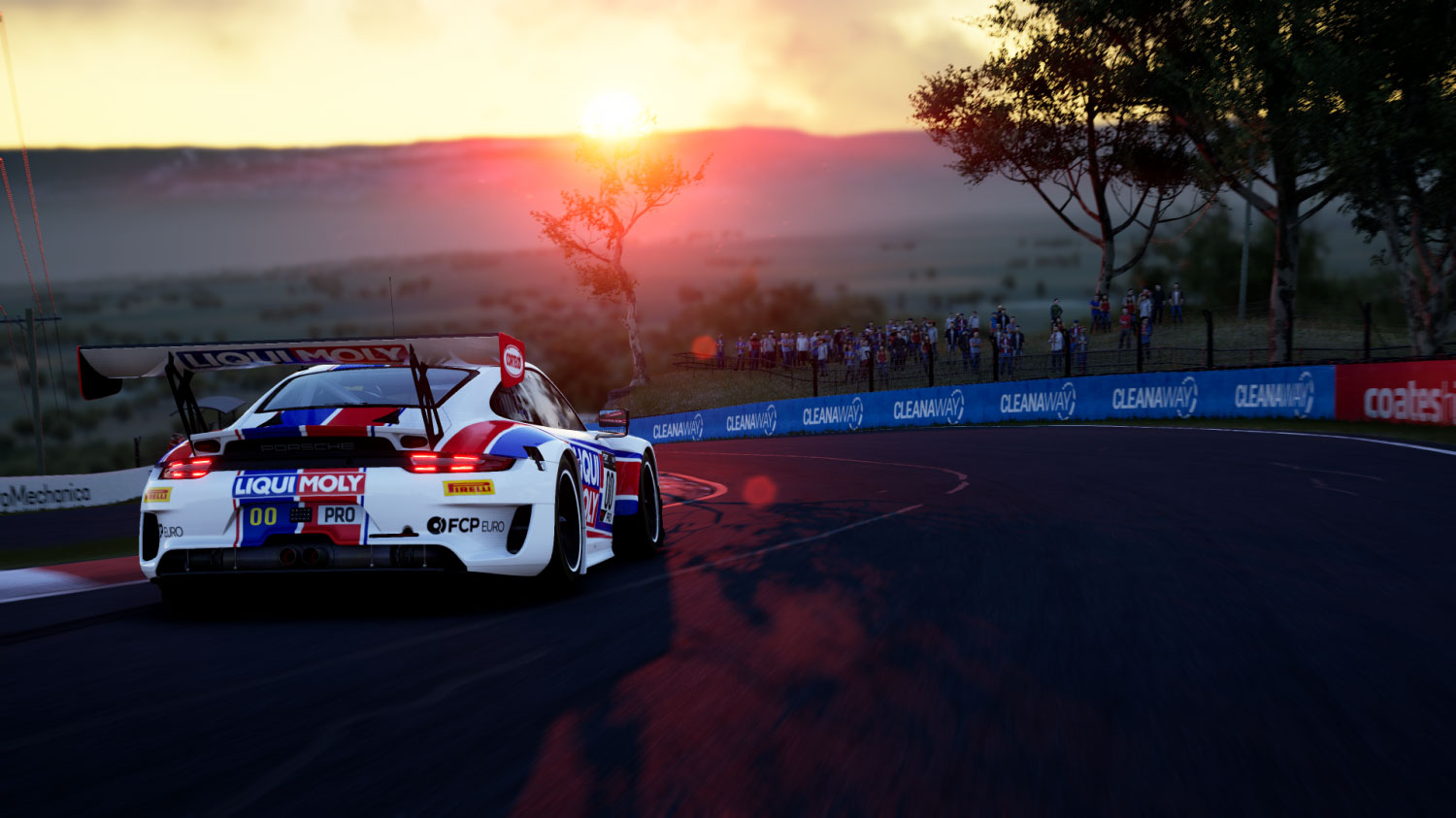 The FCP Euro GT World Challenge America Esports Championship returns to action this Sunday for Round 2 at the famed Mount Panorama Circuit in virtual Australia presented by LIQUI MOLY.

Home to the Intercontinental GT Challenge powered by Pirelli LIQUI MOLY Bathurst 12 hour, a record grid of esports racers will try to tame the mountain in the one-hour feature race in Assetto Corsa Competizione.

Set against the hills in New South Wales, Mount Panorama is one of the most unique circuits in the world. With 571 ft of vertical difference between its highest and lowest points, this high speed, narrow 3.835-mile circuit features many distinctive corners and straights.

In Season One, Honda Performance Development driver Karl Wittmer dominated the event in the Acura NSX GT3 Evo. But this time, he faces much stiffer competition of experienced sim racers. One of those racers is Round 1 race winner Michael Kundakcioglu, who’s shown his speed will be a challenge for all on the grid in the SideMax Motorworks Mercedes-AMG GT3.

Claiming second in at Nurburgring, Troy Barman comes into Bathurst looking to improve one position to maximize his championship points in the Racing Line Motorsports Mercedes-AMG GT3.

Haupt Racing Team returns with Lucas and Lukas Müller, also in Mercedes machinery. Lukas took third place in the season opener with Lucas looking to deliver a stronger performance after running into trouble at Nurburgring.

Classic BMW Four Corners Brewing Co brings, believe it or not, four BMW M6 GT3s to the grid this weekend. Also making his debut is British GT and DTM Trophy standout Ben Green. He joined the team for the Spa 6h and impressed in the slippery conditions. He’ll be joined by team leader Toby Grahovec, Kurt Wittmer, and Jacob Ruud.

ST Racing’s Jon Miller and Champion Motorsports Dirk Groeneveld will also campaign BMW M6 GT3s for the second round of the championship.

Round 1 polesitter Philippe Simard looks to start stronger in the Ferrari 488 GT3. With Josh Staffin and the Lexus RC-F GT3 also hoping to finish higher in the field.

Mercedes-AMG also fields the two FCP Euro’s TC America drivers, Michael Hurczyn and Nate Vincent looking to capitalize on their learning experience at Nurburgring to move up the grid. Cody Blanton completes the AMG line-up for Round 2.

Porsche has seen success at Bathurst and will be represented by Jonathan Lee, driving the LIQUI MOLY 911 GT3 R. Pirelli GT4 America driver Jason Alexandridis will also take the wheel of a Porsche for Round 2.

17 GT4 drivers will take the grid for the mixed class feature at Bathurst. Aenore Cavillon dominated the first round in the #56 Porsche 718 Cayman GT4. Ludovick Daoust and Simon Fisher look to close the points gap, both also racing Porsche machinery.

JT Tami with Champion Racing and Juan Reinoso of Arcade Team Racing will pilot Maserati MC GT4s. The two were locked in great battles together in Round 1 and look to continue that fight on the mountain.

Cameron Sansano will pilot the only Mercedes-AMG GT4 on the grid. With Porsche also being represented by newcomer Maryn Edwards of MFR Team Edison and Star Girl Racing’s Verena Mei.

How To Watch Live

The FCP Euro GT World Challenge America Esports 6 Hours of Spa-Francorchamps will be live on SRO’s network including YouTube (GT World), Twitch (SRO Motorsports), and Facebook. Tune in at 1pm ET for the start of qualifying, followed directly with the 6 hour feature endurance race.