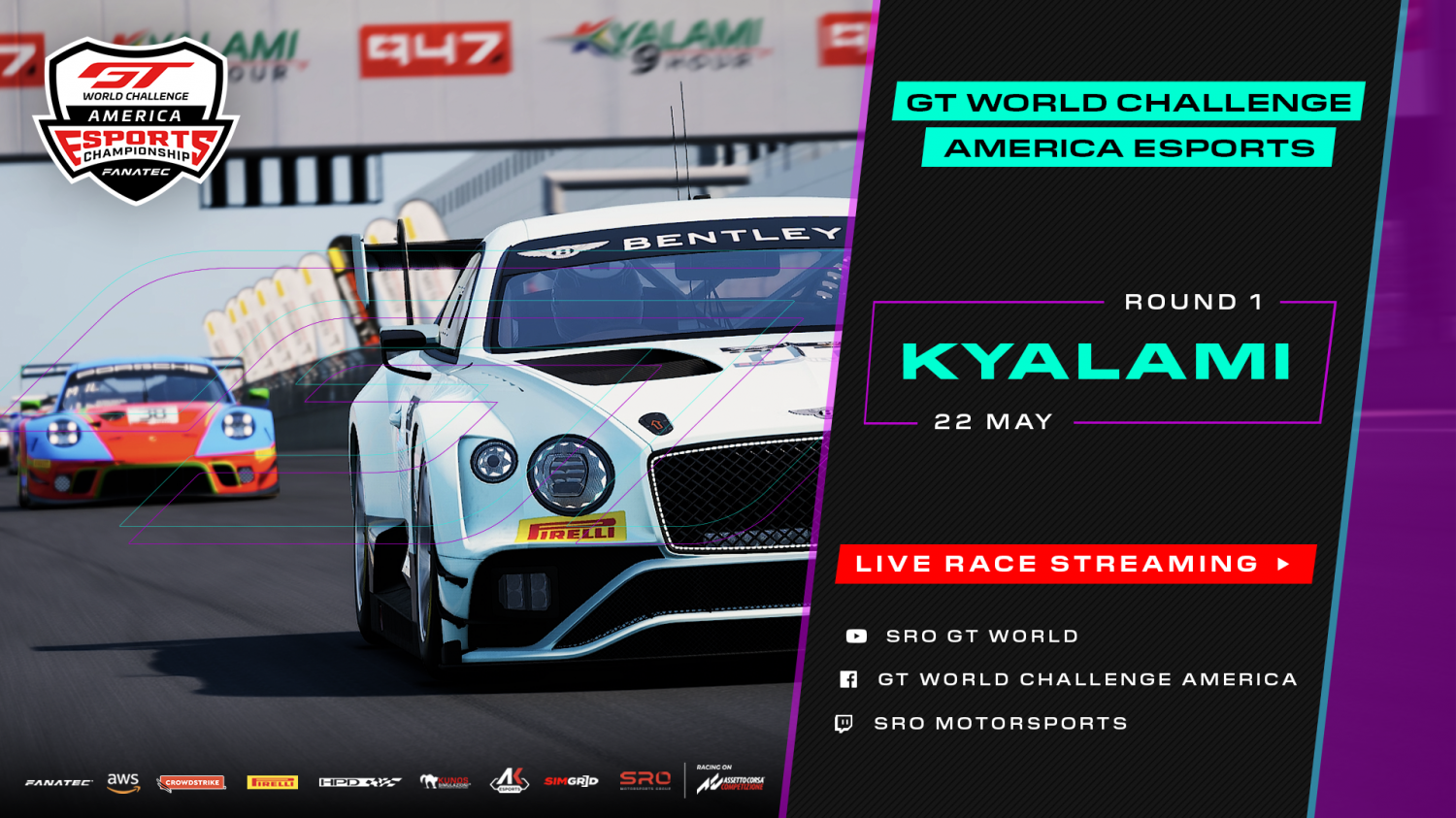 The North American portion of the SRO Motorsports Group's global virtual race series takes the green flag this Saturday (May 22) at the iconic Kyalami Circuit, featuring many of the best sim racers on the continent in the opening round of the GT World Challenge America Esports Championship.

Utilizing Assetto Corsa Competizione, the official simulation of GT World Challenge, the third season of the North American championship will feature five one hour sprint races and three long distance endurance events with top finishers at the conclusion of the season earning the right to represent their championship in the Grand Final at the end of the season.

The SRO's global Esports season gets underway Thursday (May 20) with the opening event of the eight-race GT World Challenge Asia championship, while the European series will hold the first of its 15 events on Friday (May 21). Technical assistance for all three continental championships and the Grand Final is provided by AK Esports, The Sim Grid, and real-world sponsors Fanatec and AWS.

The grid of 50 competitors for the North American opener was set by a fierce hot lap competition with the top four times from each GT3 manufacturer locked into this week's field in addition to six VIP entries, all racing in a single class. The Sprint races will utilize a new format for Season 3 with a mandatory pit stop which must include refueling within a prescribed pit stop window during the 60-minute race, while tire changes remain optional.

The Top-10 race finishers this week at Kyalami will score points towards the season-long Sprint championship and lock themselves into the field for the second Sprint event at Donnington Park (June 26) while the rest of the entries will again be earned through Hot Lap Qualifying.

The 50 qualified drivers for each event will be vying for the continental drivers’ crown and several guaranteed entries into the GT World Challenge Esports Grand Final, which will bring together the fastest gamers from America, Europe, and Asia to race for the ultimate prize.

Headlining the entry list is reigning GT World Challenge America Esports champion Michael Kundakcioglu who will be running a McLaren 720S GT3 after driving a Mercedes-AMG GT3 to the championship title last season.

He is joined on the VIP roster by other Season 2 competitors Philippe Simard (BMW M6 GT3) and Simon Fisher (McLaren), as well as real-world and sim racer Brian Heitkotter (Nissan GT-R Nismo GT3) among others.

Last season's GT4 champion Aenore Rose is back, this time stepping up into a McLaren and instantly showing the kind of pace she displayed in her championship run by qualifying at the head of the McLaren contingent.

Catch all the action streamed live for free at SRO’s GTWorld YouTube channel, on the GT World Challenge America Facebook page, or SRO Motorsports Twitch channel. Round 1 kicks off at 4pm EDT.