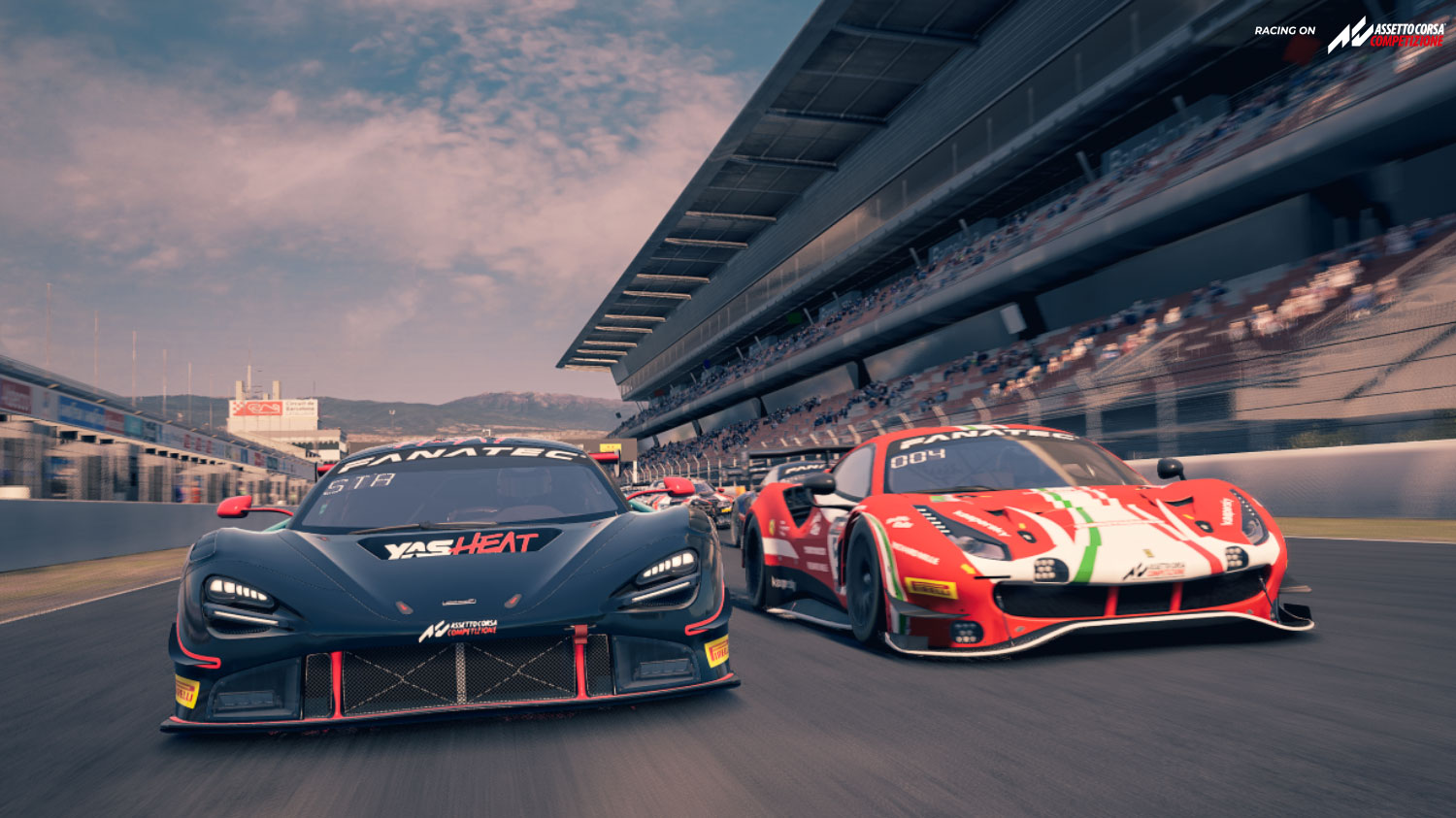 The GT World Challenge Esports Endurance Series in Europe, Asia and America will join forces this year to form the new Intercontinental GT Challenge Esports, bringing together the best sim racers from across the globe to compete at five iconic venues.

Organised by SRO Motorsports Group and Ak Esports in partnership with Fanatec, Kunos Simulazioni, Pirelli and The Sim Grid, utilising the highly authentic physics and unmatched driving realism of Assetto Corsa Competizione, the new championship will tackle legendary long-distance events such as the 24 Hours of Spa and Bathurst 12 Hour. Pro and Silver categories will be implemented to ensure a more dynamic and competitive field, while this system will also be adopted by the continental GT World Challenge Esports Sprint Series, which will continue to run in Europe, Asia and America this season.

What’s more, a new entry fee and prize structure have been introduced for teams and drivers, with even more to play for in the Pro and Silver classes of each championship. The prizes on offer include Fanatec gear, VIP hospitality for events and track activities, bringing the total value of cash and sponsor products to €120,000.

The new Intercontinental GT Challenge Esports will test competitors at five of the world’s best-known and most demanding venues. It kicks off on 16 April when the Bathurst 12 Hour is staged at the iconic Mount Panorama, followed by the Suzuka 10 Hours (21 May) at Japan’s legendary figure-eight circuit.

The biggest challenge of the season will see competitors undertake a gruelling twice-around-the-clock contest when the 24 Hours of Spa runs on 18-19 June. The 8 Hours of Laguna Seca (16 July) and the Kyalami 9 Hours (27 August) will conclude the campaign and decide the destination of the title.

Each continental GT World Challenge Esports Sprint Series will also consist of five rounds in 2022. In Europe, the championship will play out with 60-minute contests at Misano (6 April), Zandvoort (4 May), Nürburgring (8 June), Hungaroring (6 July) and Monza (3 August). In a change from 2021, each European event will run on a Wednesday.

The Asian season will begin at Circuit de Barcelona-Catalunya on 13 April before tackling Imola (11 May), Bathurst (15 June) and Zolder (13 July). It concludes on home turf with a deciding round at Suzuka on 24 August. Like its European counterpart, the GT World Challenge Asia Esports will also take place on Wednesdays in 2022.

For American competitors, each event is scheduled to run on a Saturday. Zolder kicks off the action on 23 April followed by Silverstone (28 May), Kyalami (25 June) and Donington Park (9 July). There will be a home finale for the American contingent, too, with Laguna Seca wrapping up the season on 13 August.

A new driver rating system is set to be implemented in 2022, using last year’s performances as a guide. Any driver who scored at least 25 points in the European championship, or at least 15 points in the Asian or American championships, will be eligible for entry to the Pro category. Those who did not reach this points threshold will qualify for the Silver category.

Pro line-ups for Intercontinental GT Challenge Esports will be nominated by manufacturers and must feature at least two Pro drivers at each round, while manufacturers may nominate a maximum of two cars each for Sprint Series events.

Should they not do so, these slots will be awarded via a qualification process for Pro-ranked sim drivers. Every team nominated by a manufacturer will be automatically considered Pro, as will its drivers.  In the Silver category, there can be only one Pro driver per Intercontinental GT Challenge Esports team.

Following manufacturer nominations, the qualification process for the remaining Pro team slots will take the form of hot-stint qualifying at two different tracks featured on the calendar. Drivers must set five valid laps during a stint, within 107% of their fastest time and without returning to the pits. The fastest stints from each driver are then combined to make a team average. The top-ranked teams on the leaderboard will be eligible to race in the Pro class.

In the Silver category, 3 drivers must set a hot-lap around three tracks from the calendar. The combined average of all three times at all three circuits is placed on the leaderboard, with the top-24 ranked teams eligible to compete in the Silver class.

Entry fee, prize pool and testing for balance of performance

Thanks to a restructured entry fee and prize pool, the 2022 season will see more drivers rewarded in both the Pro and Silver classes of Intercontinental GT Challenge Esports and the continental Sprint Series.

Pro and Silver drivers will have their own prize pool and entry fee for the year, which will cover all races during the 2022 season. The prize pool will reward the top-10 teams in the Pro class, and the top-10 drivers in Silver, with a grand total of €120,000 in cash and sponsor’s products available to be won.

Additional prizes will be awarded to teams and drivers in the top-10, including Fanatec and AK Informatica gear, VIP hospitality for a selected race event, and track activities

What’s more, a new testing format will be introduced this season to ensure that the series remains as competitive as possible. Thanks to a new Balance of Performance (BOP) method, drivers can request a test in different machinery. They can then compare data and times should they feel another competitor has an advantage within the game, ultimately leading to fairer racing and closer on-track competition.

Entries for the Silver class will open first. For those hoping to compete in the continental Sprint Series, the qualification phase begins on 21 February, while Intercontinental GT Challenge Esports qualifying commences on 28 February. For drivers eligible to compete in the Pro categories, qualification begins on 14 March for the Sprint Series and on 21 March for Intercontinental GT Challenge Esports.

With new initiatives in place and a consolidated global endurance series set to launch, the season ahead promises to take the competition to the next level.

Find out more and register on the official website at sro-esports.com

Kunos Simulazioni is a software house specialized in developing driving simulations for the videogame market and professional applications.

The company launched in 2005 as a one-man show, and now involves professional expertise capable of producing the technology required to satisfy a diverse range of requirements: from professional training software for car manufacturers and racing teams to advanced videogames dedicated to simracers looking for a driving model with maximum realism.

The "Assetto Corsa" racing game is the best result of this vision, turning a driving simulation into one of the most recognized and popular brands of racing videogames.

Its latest iteration, "ASSETTO CORSA COMPETIZIONE", is one of the most appreciated GT racing simulations on the market, representing a benchmark in terms of car handling, visual realism and track accuracy.

Fanatec is the leading brand for dedicated sim racing hardware, including force feedback steering wheels, pedals, and complete cockpits for PlayStation, Xbox, and PC-based racing simulators. Fanatec is a brand of Endor AG, based in Germany, the company has more than 20 years of experience in developing and manufacturing sim racing equipment, constantly striving for innovation and quality. Fanatec is the official hardware partner for several different esports series, including F1 Esports Pro Series, the eSport WRC Championship, and SRO E-sport GT Series, with the sim racing hardware being an integral part of the live broadcasts all over the world. Fanatec is also the main sponsor of the Fanatec GT World Challenge Powered by AWS. Find out more at www.fanatec.com.

AK Esports is an Italian company leader in the organization of Esports competitions, Esports team management and events all over Europe, with a special focus on Sim Racing. Created by Ak Informatica, italian PC Gaming Expert, since 2004 the company has seen a steady growth every year since then, working on the latest technology and Gaming titles to develop Esports Entertainment. Ak Esports developed several Esports assets for many different car manufacturers and in 2019 together with SRO Motorsport Group and Kunos Simulazioni created the first SRO Esports.  Championship. Find out more about AK at www.akesports.it

With nearly three decades’ experience at the forefront of a continuously evolving industry, SRO Motorsports Group is the established global leader in GT racing. A busy 2021 season will see events staged under the SRO banner on five continents, highlighted by the prestigious Total 24 Hours of Spa.

The company's expanding portfolio of series includes Fanatec GT World Challenge Powered by AWS categories in America, Asia, Australia and Europe. Each retains its unique identity, while also allowing competing brands to dispute a global manufacturers’ title through their continental representatives. What’s more, a groundbreaking new initiative for 2021 will see virtual racing come together with the Fanatec GT World Challenge Europe Powered by AWS Endurance Cup, where a series of e-sports contests will count towards the real championship.

Staged since 2016, the flagship Intercontinental GT Challenge Powered by Pirelli sees world-leading manufacturers compete through their local teams at marquee events across the globe. Considerable emphasis is placed on amateur competitors, too, with the GT Sports Club concept combining a relaxed environment with highly professional standards for drivers using GT2 and GT3 machinery.

SRO also works with the FIA to organise and promote the FIA Motorsport Games, a multi-disciplinary event in which drivers compete in the colours of their national flag. A range of international and domestic series catering for GT2, GT3, GT4 and touring car machinery also form part of an extensive on-track programme, while the burgeoning sim racing scene has taken on considerable importance through the SRO E-Sport GT Series.

In addition to promotion and organisation, the company operates the SRO Race Centre by MMC service facility at Circuit Paul Ricard, and provides the ultimate driving opportunities at world-renowned venues through Curbstone Track Events. Combining a passion for performance with industry-leading experience, SRO continues to play a key role in shaping the future of global GT racing.