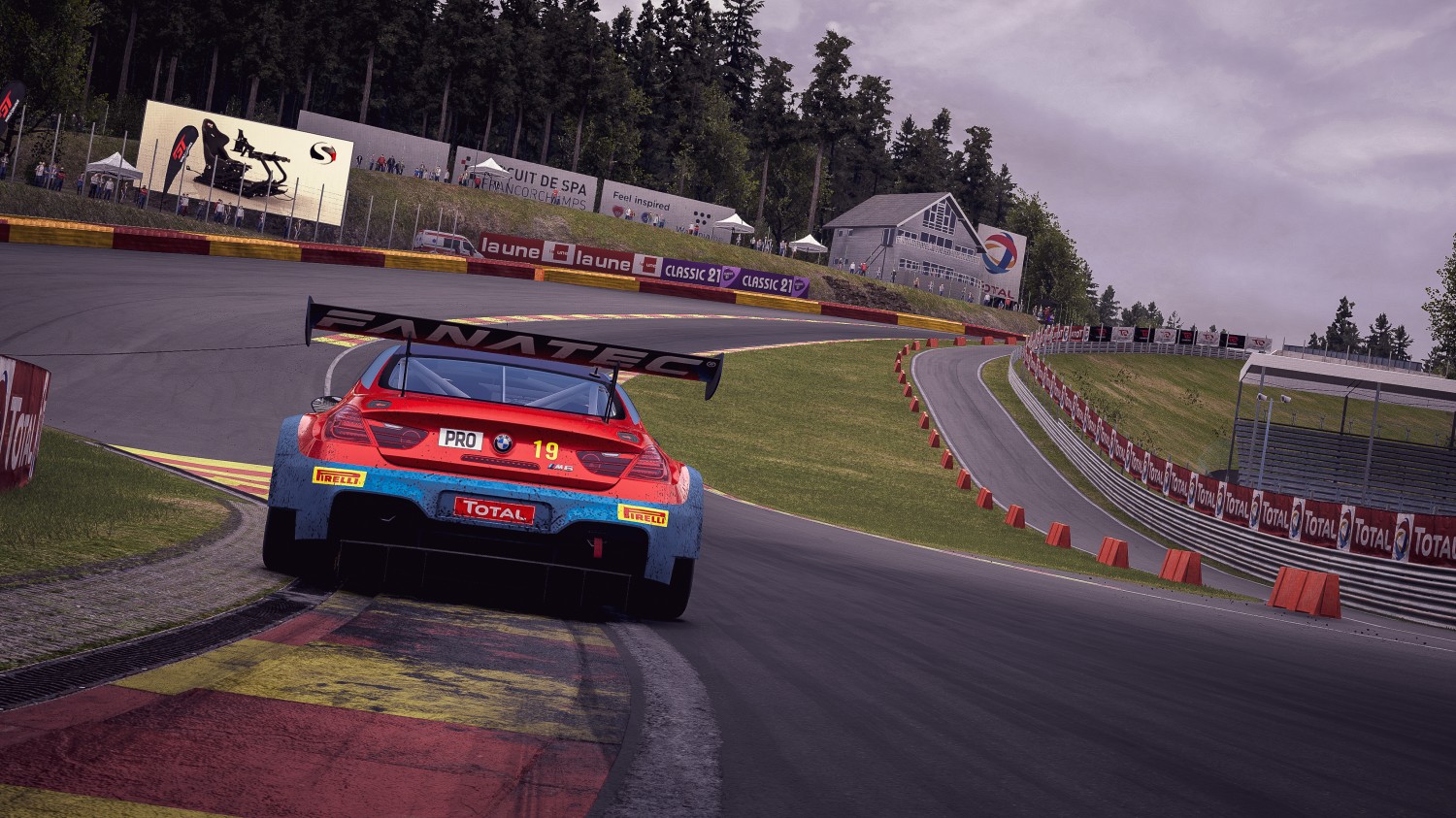 Philippe Simard scored a dominant win in the third round of the GT World Challenge America Esports Championship at Spa-Francorchamps, announcing his presence in the hunt for the championship.

The Canadian R&K Racing driver put the field on notice in qualifying, placing his No. 19 BMW M6 GT3 on pole by nearly a half a second over second-place Killian Ryan-Meenan in the No. 23 FFS Racing Aston Martin Vantage AMR GT3. The two had a clean getaway at the display of the green, settling into single-file alignment through Eau Rouge and Raidillon while the rest of the field fought for position behind.

Simard quickly pulled out a comfortable gap in the opening sequence thanks in part to electing to start the 60-minute sprint race on partial fuel with an eye on making good his escape early in the contest. He would manage that gap through the pit stop sequence and cruised unchallenged for his first career GT World Challenge America Esports Championship Sprint victory.

The victory marks the third different winner through as many events to start the season and elevates Simard into the championship picture after the early-season frontrunners Michael Kundakcioglu and Cody Pryde struggled at the Belgian circuit. The pair qualified tenth and eleventh, respectively and spent much of the race fighting each other in the back half of the top ten.

After initially dropping behind his championship rival, points leader Kundakcioglu made a move around Pryde's PPR Esports Porsche 911 GT3 R just before the pit window opened only to lose the spot back during the pit sequence. The battle raged for the rest of the race with reigning-champion Kundakcioglu coming through in his SideMax Motorworks McLaren 720S GT3 to finish eighth while a spin for Pryde on the final lap dropped him out of the points entirely. He limped home to a 12th-place result.

Simard and Ryan-Meenan were joined on the podium by Chris Severt who made a late-race pass on Jake Langevin's No. 69 Pass on da Grass Bentley Continental GT3 to secure the final step of the podium for Black Hawk Racing and Aston Martin. Josh Staffin pitted early in the mandatory pit stop window and utilized the undercut strategy to leapfrog into the top five, ultimately crossing the line in fourth in the No. 94 Acura NSX GT3 Evo for HPD JAS Pro America after a spin in Raidillon for Langevin late in the running.

The Bentley driver recovered to finish fifth, locking himself into next month's competition at the Hungaroring in the process. The points standings saw a shakeup following the eventful round with Kundakcioglu now holding on to a slim four point lead over Severt, while Pryde has dropped from second to fourth and 14 tallies out of the lead.

Simard's victory, and the commensurate haul of 25 points, has promoted him from seventh to third in the standings and just eight points behind Kundakcioglu, while Ryan-Meenan has moved from thirteenth to fifth in the standings with his-runner-up result. It was a challenging race for William Hendrickson who entered Spa fifth in the standings on the strength of a third-place finish in the season-opener at Kyalami. A pair of finishes outside the points in the subsequent races has dropped the Jean Alesi Esports Academy ace from fifth to seventh with just two Sprint rounds remaining.

Up next on the calendar is a trip to the virtual Hungaroring on August 14th. Hot lap qualifying for that event is due to open to the public August 2-3 through Assetto Corsa Competizione, the official simulation of the Fanatec GT World Challenge powered by AWS.